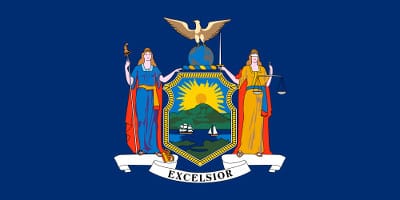 New York is one of the most famous states in the entire USA. Not only does it feature one of the most exciting and vibrant cities on earth, it is also blessed with unbelievable natural scenery. ‘The Empire State’ is also rich in history and has greatly influenced the North America we know today. New York saw waves of mass immigration in the 19th century with millions of people coming to America from all over Europe and Asia. Over 10 million people entered the US through New York City’s Ellis Island alone. Still today, the state of New York is one of the most ethnically diverse places in the country.

Upstate New York is especially beautiful with many forests, lakes and mountains. It is a perfect destination at any time of year, and a wonderland for outdoor lovers. Lake George is a great spot for camping, while the many lakeside cabin resorts are also popular. Whiteface Mountain is only a few miles away from the lake and ideal for hiking and fishing. Here, the Cloudsplitter gondola takes you up the mountain in no time and offers splendid views of the surrounding area. The northern part of the state is also home to Letchworth State Park where beautiful streams and waterfalls turn the gorges into a scenic masterpiece. More than 60 miles of hiking trails are waiting for those who want to explore the area.

One of the most visited attractions in New York is the magnificent Niagara Falls. Located on the border between Canada and the USA, it has long been a major tourist destination for visitors from all round the world. The city of Buffalo, as well as two of the Great Lakes, is also within close proximity of the famous falls making it a wonderful location to spend a weekend getaway.

New York City is arguably the most famous city in the world, as countless TV shows and movies have been set in this vibrant metropolis. NYC is famously known as ‘the city that never sleeps’, and without a doubt there is always something to do here. The five unique boroughs (Brooklyn, the Bronx, Queens, Manhattan, and Staten Island) all offer a unique insight into the city’s rich history and its’ influence on music, art, and fashion. The city is certainly one of the biggest fashion capitals in the world with the New York Fashion Show being the most important event of the year for the industry. Entertainment is also something New York City is famous for. Broadway is the center for musical shows and performances of every kind, while the city also features some of the best museums and art galleries in the world.

As you can see, New York City has everything, including world-class educational establishments. Columbia University, Stony Brook University, and New York University, are among the best in the region and they attract thousands of students from around the world. With so much to offer, you will not regret coming to New York to obtain your TEFL/TESOL qualification.

TEFL & TESOL E-BOOK
Purchase your course before the end of the month and receive our e-book on TEFL / TESOL, including essential information on jobs and teaching abroad.

Telephone Enquiries &Regional Offices
All telephone calls will be routed to our sales team. If you have already signed up or are already an ITTT student, please do not use the phone numbers below as the sales team will not be able to help you or re-route you to the tech / admin department.